Nestled off Art School Road in the heart of West Pikeland, is a village that carries remnants of centuries of deep history, ranging from the first military hospital in North America to a spa resort to an orphan school for military soldiers’ children. The village is known as Historic Yellow Springs, which consists of 142 acres of land and 16 buildings — 10 of which are owned by the nonprofit organization that maintains the historic district these days.

The town dates back to 1681 when William Penn founded Pennsylvania and sold some of the land in northern Chester County after he made treaties with the Lenape Indians, according to historical records. There are records of Colonial settlers in the village as early as 1722.

The village was a spa town in its early days because it had – and still does – three springs with water rich in iron, magnesium, and sulfur. People traveled to the village to drink and bath in the water because they believed it had healing effects. The village was named after these springs, particularly the iron “yellow” spring water, according to McMonagle. 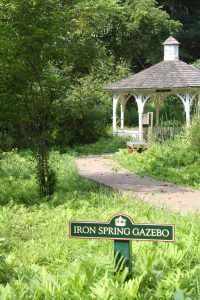 The health spa operations stopped during the Revolutionary War. Gen. George Washington set up a temporary headquarters in Yellow Springs on Sept. 17, 1777 – a few days after the Battle of the Brandywine. He then petitioned the Continental Congress and gained permission to build the first military hospital in North America there, according to historical records. The ruins of the hospital are still in the village today near an 18th century medicinal herb garden that is maintained by the Philadelphia Unit of the Herb Society of America.

The spa reopened after the war and became a fashionable spa in the first half of the 19th century. By 1838 it was owned and operated by Margaret Holman, a successful woman entrepreneur. The village ceased activities when the Civil War began in 1861, and the Commonwealth of Pennsylvania purchased the village to set up the Chester Springs Soldiers’ Orphan Schools in 1868. At its pinnacle, the school housed 300 children and the school. The school was run by Eleanor Moore from 1873 to 1883. She was the only female principal in the state school system. The school system consolidated through to the 20th century with the Chester Springs School closing in 1912.

The 20th century saw the village of Yellow Springs flourish as a center for the arts. For instance, in 1916 the Pennsylvania Academy of the Fine Arts (PAFA) purchased this entire village from the state. PAFA, which is based in Philadelphia and the oldest art school in North America, bought this bucolic setting to provide its students with a place to learn to paint “en plein air,” in the style of the French Impressionists.

PAFA owned the property until the early 1950s. In 1952, filmmaker Irvin Shortess “Shorty” Yeaworth Jr. and his wife Jean purchased the property and created Christian messages for television, radio, and film through his nonprofit corporation, Good News Productions. The Yeaworths also made a number of early science fiction classics in the village. “The Blob,” starring Steve McQueen, was shot on sets throughout the village. 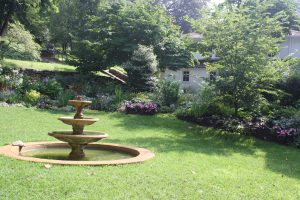 Several of the historic buildings are still open to the public today, including the Lincoln Building, which is the nonprofit association’s headquarters, the West Pikeland Township Building, which is also known as the Cultural Center, and The Washington, which hosts weddings and other special events. Art lessons are taught in the Chester Springs Studio, and the new Chester Springs Library, located in the village’s orphan school infirmary, is available for local residents. 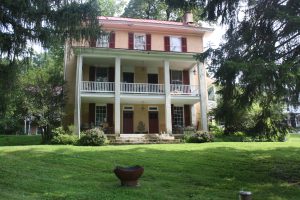 “We’re a working, living, breathing village,” said Maeve Daly, marketing and Historic Yellow Springs events manager. “We’re a (nonprofit), but also a place where the community comes…it’s a historic village but people are here all the time.”

Historic Yellow Springs has several events planned for this upcoming year, including art and craft shows. The village also was recognized by the Chester County Historic Preservation Network in June with a lifetime membership award, according to Karen Marshall, the county’s heritage preservation coordinator.